Let’s be real: there’s no way tonight’s Pretty Little Liars “A” reveal could have lived up to the expectations born of three and a half seasons of not getting any real answers, but Season 6, Episode 10 (“Game Over, Charles”) did a surprisingly adequate job. Here’s all the craziness that went down in the PLL summer finale...

Wherein CeCe is “A” and Has the Saddest Backstory Ever

Let’s address the elephAnt in the room first, shall we? CeCe Drake is “A.” She began life as Charles, the eldest child of the DiLaurentis family, only to be admitted to Radley at a young age after seemingly trying to drown Ali in a tub of hot water. CeCe claims that she never meant to hurt Ali; she was just trying to help. (Because who doesn’t like baths?) In CeCe’s tale, Mr. DiLaurentis is the villain. He was looking for a reason to send CeCe away ever since he found out she liked to try on dresses. Frankly, it’s not hard to imagine Mr. D. being a total douche about his child questioning s gender identity. That guy is THE WORST. This flashback scene is full of terrible parenting, which more or less becomes the theme for this entire episode and is the (not-so?) secret theme of this entire show.

From that point on, CeCe grew up in Radley, with only Mrs. DiLaurentis to love and visit her*, at some point transitioning from identifying as Charles to identifying Charlotte, AKAK CeCe. Prior to his transition, she became friends with Bethany Young, another patient at Radley. Bethany was seemingly supportive of her’ propensity for dressing up in girl's clothing and the two dreamed of running away from Radley together and being adopted by new families that loved them. Unfortunately, Bethany soon revealed herself to be a raging psychopath, pushing Mrs. Cavanaugh (aka Toby’s mom) off of the roof and blaming CeCe for it. Everyone believed her, and Mrs. DiLaurentis did what she had to do (aka pay Wilden off) to keep CeCe from facing any real consequences for her supposed crime.

*You know, while also completely denying her existence to all of her friends and family members.

After Mrs. DiLaurentis faked "Charles’" death, CeCe seemingly had more freedom over what she could and could not do. She transitionend to living as CeCe publicly (er, as public as being confined to Radley is), studied hard and was eventually allowed to leave Radley to take classes at UPenn. However, brilliant CeCe soon became bored with classes, and instead went in search of her family. This is where things start to get incestuous, with CeCe starting to date Jason, aka her brother. (This is obviously one of those details that PLL wrote into the story before they figured out they wanted CeCe to be Uber “A,” right?) When Mrs. D., finds out, she freaks out, but can’t say anything without revealing her own mountain of lies. Instead, she stays quiet as CeCe spends the summer with the DiLaurentises in Cape May and CeCe and Alison bond. 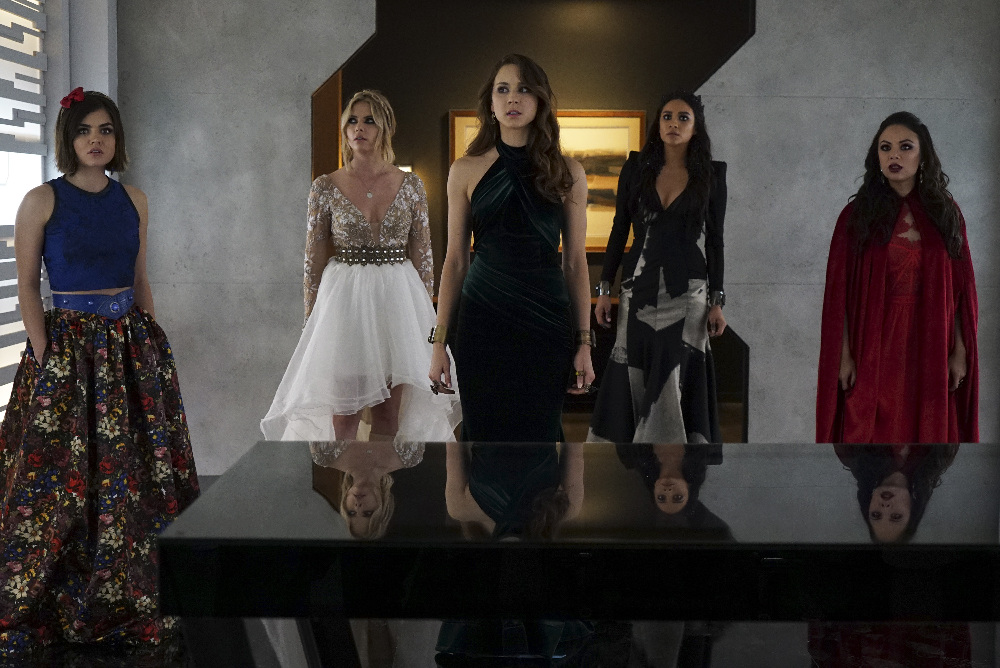 NEWS: Is Hanna Engaged After the PLL Time Jump?

Of course, this situation couldn’t last. Bethany escaped from Radley, apparently planning on taking out CeCe’s family, because Mrs. D was having an affair with her dad. Because why not? CeCe went after her to keep her family safe. Unfortunately, everyone and their mother was running around Rosewood that night dressed in the same yellow top and CeCe accidentally attacked Ali when she was trying to take out Bethany.

As we have seen via flashback before, Mrs. DiLaurentis buried Ali alive (thinking she was dead). This time, we see a distraught CeCe watching as she does so, horrified at what she has done and asking her mother for forgiveness. Mrs. D. sends CeCe back to Radley, paying off Wilden to keep CeCe’s crime a secret. Elsewhere in Rosewood, Mona kills Bethany thinking she is Ali, because trying to murder someone and missing and hitting someone else with your murder weapon is something that happens twice in one night in this town.

CeCe spends the next few years in Radley, until she meets a drugged-up Mona, doing a stint in Radley after having been unveiled as Original “A.” CeCe loves Mona’s stories of how she would torture the Liars. CeCe sees the Liars as worthy of punishment because, as Mona tells the story, they were happy that Alison was gone. CeCe decides to steal the “A” game from Mona and convinces Mona to join in as her minion by appealing to her love of puzzles and mind games. CeCe begins to sneak out of Radley and first insinuates herself into the Liars’ lives.

CeCe soon begins to suspect that Alison isn’t really dead, and begins to put the Liars in danger to try to draw her sister out. This was the purpose of the Thornhill Lodge fire. She wanted to see Ali save the Liars, but Shana got in the way. It is around this time that Wilden starts to suspect that Ali isn’t really dead, and CeCe kills him for it. Through it all, she uses Sara Harvey as her chief minion. Dressed as Red Coat and the Black Widow, Sara makes moves around town when CeCe cannot. (#villainesspower) When Ali returns from the dead, she considers leaving with the fake passport and plane ticket Ali got for her, but decides against it. She can’t leave her sister or the “A” game — she’s too good at it. (To be fair, she is really good at it.)

Wherein We Have Some Complicated Feelings About the Reveal

OK, now that this is all out in the open, let’s start processing it. As we said before, this explanation was surprisingly thorough and actually mostly worked. That being said, we have some complicated feelings about the reveal of CeCe as Charles. There is a huge stigma against transgender people in our culture, one that extends to how they are often represented in popular culture: as villains. This is slowly changing, but it is still a huge problem and, with so few portrayals of transgender characters on TV, it’s tough to see another one fall into the villain category.

That said, we do like how PLL treated CeCe’s character as sympathetic and complex. The show obviously put great effort into telling CeCe’s story from her perspective and did a pretty impressive job of crafting her character’s backstory (or, as much as you can, when the character in her entirety really only gets one episode). However, CeCe’s villainous tendencies seemed to come from nowhere. Yes, she went through some terrible stuff, but it seems unlikely that CeCe would turn into “A” after so many years of showing zero violent or manipulative tendencies. (Adding another layer to this, CeCe is probably an unreliable narrator — we all kind of are.) Perhaps, if PLL had attempted to tell this story in an even more in-depth way — i.e. through flashbacks throughout this summer season — this would have felt less manipulative and rushed, but that was not the case. Regardless, it’s problematic and bordering on the irresponsible to depict yet another transgender villain on TV.

NEWS: The Biggest PLL Reveals, From Best to Worst

A million points to Vanessa Ray (aka CeCe), however, who brought her all in her depiction of CeCe. In a lesser actress’ hands, this story could have fell completely flat, but Vanessa was funny, heartbreaking, scary, and impressive in her portrayal of “A.” Another much-deserved shout-out goes to Andrea Parker (aka Jessica DiLaurentis), who nailed the torn, loving, selfish mother routine. Both CeCe and Mrs. D. could be unsympathetic characters (especially Jessica, who should have womanned up and gotten her kid out of Radley or, better yet, never let her in there in the first place), but these actresses really made us feel for this mother/daughter pair. Especially gripping was the scene in which CeCe found her mother lying dead in front of her home. PLL doesn’t reveal who killed Mrs. D., but easy money is on Sara Harvey, who still seems like a total wildcard in this story.

All in all, it was a decidedly Liars-light episode of PLL, which was kind of strange, but not wholly unexpected. It was exposition heavy with the Liars mostly listening to the story along with us, pausing only for comments and reaction shots. It kind of felt like the ending of Mockingjay: Part 1 in that we had to watch our protagonists watch other people drive the plot. Not ideal, but not a total dealbreaker. Mona arguably got the best present-day moment, revealing a blade in her stiletto that allowed the Liars to smash out of “A”’s sci-fi room and head over to Radley to save Alison. Second place goes to Emily, who, upon hearing Sara’s reasoning for straight-up lying to her all summer season, promptly punched her in the face.

All hail the PLL time jump. Part of the reason this summer finale worked surprisingly well is because it also served as a fresh relaunch for the next chapter in the PLL story. Alison is a teacher! Her name is Mrs. Rollins! Spencer has bangs! “He” is coming for Alison! But the Liars are here to save her (again)! Frankly, it was all very Terminator, which is pretty much the best compliment you can give a media entity. Yep, sign us up for the PLL winter season. Let the post-“A” era/possible Skynet takeover begin…

Other things to discuss

All The Answers Revealed — “A”,’ Red Coat and More

Who is “A” on Pretty Little Liars?

What Happens in the PLL Season 6 Winter Episodes?

Is Hanna Engaged After the Time Jump?

Alison’s Fate After the Time Jump Will “Shock” Fans