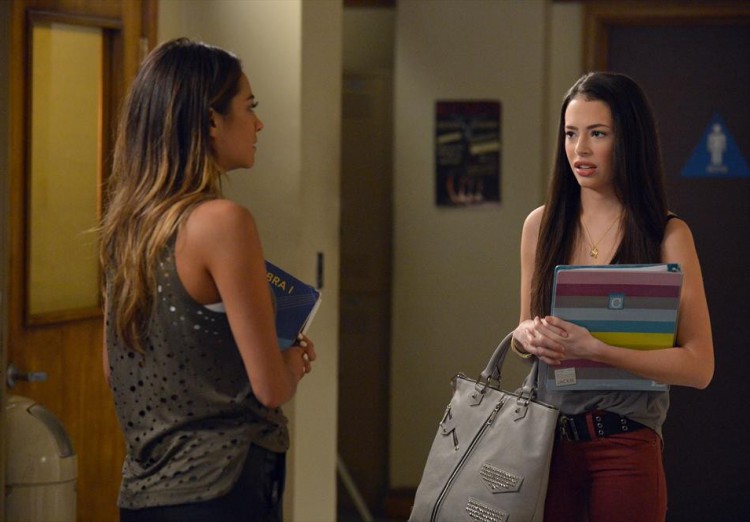 Sydney Will Return For ‘Pretty Little Liars’ Summer Finale, But Why?

Jenna Marshall lookalike Sydney Driscoll first popped up on Emily’s swim team in Pretty Little Liars Season 5, and we’ve had questions ever since. What was her deal? Where did she go?

Well, Sydney will return to Rosewood for the PLL summer finale, so we might finally get some answers.

Joining Jenna and Noel Kahn, Sydney is the latest PLL blast from the past to be confirmed for Pretty Little Liars Season 7.

Compared to the first two, Sydney has had a relatively small role on the show. Her final appearance was in the Season 5 Christmas Episode, “How the A Stole Christmas,” leaving us with more questions than answers.

Here’s what we do know:

Though she was seemingly crushing on fellow swimmer Emily, it was later revealed she actually sided with the Liars’ nemesis Jenna and was even in the anti-Alison army Mona spearheaded. She had met Jenna years prior to transferring to Rosewood, while she was working at a school for the blind.

Then, oddly, Sydney shows up in a mask to the Christmas ball as one of Alison’s followers, and drops to Emily she thinks Ali killed Mona. (Remember: This is the horrifying time when we all thought Mona was dead.)

After that? Sydney vanishes.

So what business could she have back in Rosewood? With Jenna making her triumphant return next week, Sydney will soon follow her bestie’s footsteps.

Marlene King hinted in 2014 that Sydney’s storyline was important:

“Sydney is played by Chloe Bridges and her storyline, interesting enough, is something we came up with a couple seasons ago,” she said.

“We’ve been waiting for her to be available. We specifically wrote some of this just for this actress, and you’ll understand why as you get to know her character. That’s a little bit of a clue that pays off later.”

Was the entire storyline just that she looks like Jenna? Will Sydney’s return mean we’ll finally get this payoff?

Exclusive: Torrey DeVitto on Season 7
How Much Is the Pretty Little Liars Cast Worth?
Why PLL Should End After Season 7
Did Ali Kill Charlotte on PLL?
Marlene King Says One of the Liars Could Be "A"!