Val Kilmer Says He Does Not Have Cancer (UPDATE)

Val Kilmer does not have cancer.

The actor has confirmed he isn’t suffering from the disease after his pal Michael Douglas claimed he had throat cancer.

The 56-year-old said he simply has a swollen tongue.

The Fatal Attraction actor — who beat tongue cancer six years ago — says his former co-star is currently battling the illness and is not doing well.

During a Q&A with host Jonathan Ross, the Oscar-winning actor spoke about shooting The Ghost in the Darkness with the 56-year-old back in 1996.

"The picture didn't turn out as well as I hoped but I had a wonderful time,” he said.

"Val is a wonderful guy who is dealing with exactly what I had, and things don't look too good for him. My prayers are with him. That's why you haven't heard too much from Val lately."

The actor was hospitalized in January 2015 after he began bleeding from the throat, but he denied having cancer.

"I am perfectly well folks. Thank you for all your love and support. I am having a grand time. And I should mention I do not have cancer or a tumor [sic],” he wrote on Facebook.

In 2010, Michael — who is married to Catherine Zeta-Jones — announced he was battling throat cancer.

After undergoing brutal rounds of chemotherapy and radiation treatment, the 72-year-old was given the all-clear by his doctors the following year.

However, three years later he revealed he'd actually been diagnosed with tongue cancer, but was advised by his doctor not to say anything.

"I had to deal with chemo, radiation, which is a seven week period, and a bunch of weeks either side. 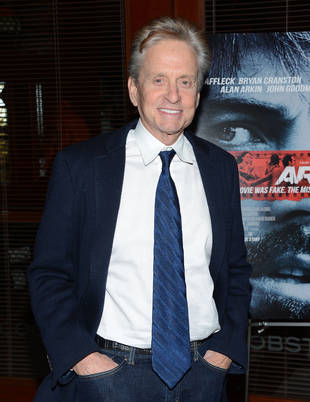 "I had a very nice couch in my den, which I lived on. You know, there's not a lot of choices really. That's what you go through. They were wonderfully supportive, Catherine was too."

Our thoughts are with Val and his family during this difficult time!